I bought these 3 beauties finally. Been eyeing the set for so long now. Thanks Popular for giving out 20% off for cardmembers. I just grabbed it without thinking twice. Bahhh! And I’ve just started on the first book last week. So far so good. It’s a lot interesting than the movie itself. A lot of details being told about how district 12 looks like and why is Katniss the backbone of the family. Only manage to read it until page 93 though. Then I’ve to put it down because Z-kun hates it if the focus is not on him. Hahaha… such an angel. So I can’t comment further as for now. Once I’m done with it I’ll write an honest review I swear. 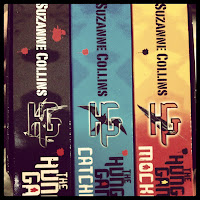 Anyway, our house renovation starts today. The guy came to our house exactly at 8am. Very discipline I tell you. Hope all is well. *crossed fingers*

As for the plaster ceiling contractor, I’d say he is such a big disappointment. He promised he’ll come at 8.30 but it was a no show. When hunny called him, he said he’ll come tomorrow. If it’s a bloody no show again, we’ll fire him and find someone else. I can’t tolerate a liar.

Ok that’s all for today I guess. I’m just killing my time before I can go home. Today is really gloomy and not many people actually come to the office. Most of them are either working from home or just finishing up their leaves. Sobss… mine only left with one day. Super sobssss!
Posted by silentME at 8:43 AM